Breaking News
The Anoles lizard stays underwater for 16 minutes through bubbles on its nose
Scientists observed rare owls with bright orange eyes(Otus brookii)
Temperature determines the sex of the lizard embryo
The cornea of the eye is a source of important sensations for bats
03 Feb, 2023
Skip to content 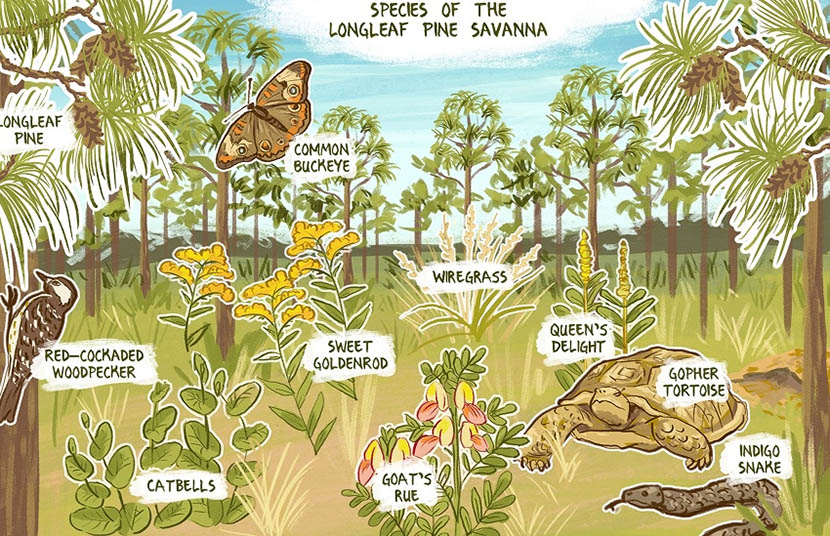 18-year experiment validates ecological theory. Barry Keily reports.
The longleaf pine ecosystem once stretched from Texas to Virginia and is home to thousands of plant and animal species. Only 3% of the original habitat remains in isolated fragments today.

Ecologists have long assumed that plant populations in small, isolated fragments of bushland benefit when those fragments are connected by wildlife corridors, but verifying the assumption has proved challenging.

Now, however, a group of researchers led by Ellen Damschen from the University of Wisconsin–Madison, in the US, has provided clear evidence to support the contention following the conclusion of a series of experiments conducted over 18 years.

Damschen and colleagues set up 40 1.3-hectare forest plots across 10 experimental landscapes at the Savannah River Site in South Carolina. Some of the plots were connected by thin forest corridors and others left unconnected. Over the course of almost two decades they then observed the plant populations within them.

The results, they report in a paper published in the journal Science, were clear cut.

Species living in interconnected areas had an average 2% reduced likelihood of extinction, and the same areas were 5% more likely than isolated plots to be colonised by new species. That might not sound like much, but, the researchers found, over the long duration of the experiment the benefits continued to accrue.

After 18 years, the connected plots contained 14% more species than the isolated zones. Given that two decades is a very short length of time in the life of woodland, they add, it is very likely that the positive outcomes will continue to grow in magnitude in the future.

The finding is significant, Damschen and colleagues write, especially in light of recent mapping work that found that more than 70% of forest around the world lies within just one kilometre of an “edge” – defined as boundaries such as roads, tracks, housing developments, farmlands or mines.

“Conservation strategies to mitigate biodiversity losses due to habitat fragmentation and loss are urgently needed, and habitat corridors feature prominently in global conservation plans,” they conclude.

“Our study shows that efforts to increase connectivity will pay off over the long term. Conservation plans that ignore connectivity, such as plans that focus solely on habitat area, will leave unrealised the substantial, complementary, and persistent gains in biodiversity attributable specifically to landscape connectivity.”