Breaking News
The Anoles lizard stays underwater for 16 minutes through bubbles on its nose
Scientists observed rare owls with bright orange eyes(Otus brookii)
Temperature determines the sex of the lizard embryo
The cornea of the eye is a source of important sensations for bats
28 Sep, 2022
Skip to content

When studying the fossil of a 47 million-year-old fly found at the fossil site of the Messer Pit in Germany, scientists noticed that it looked a bit rough, foreign media reported. So they looked closely at its bulging belly and found it stuffed with pollen from different plants.

“The rich pollen content we found in the stomachs of flies suggests that flies were eating and transporting pollen 47 million years ago, suggesting that it played an important role in the spread of pollen in several plant groups,” paleobotanist Fridgeir Grimsson said in a statement at the University of Vienna on Thursday local time. ”

Grimsson is the co-author of a paper on flies published Wednesday in Current Biology. The researchers believe that flies of that period may have done a better job of pollination than bees. 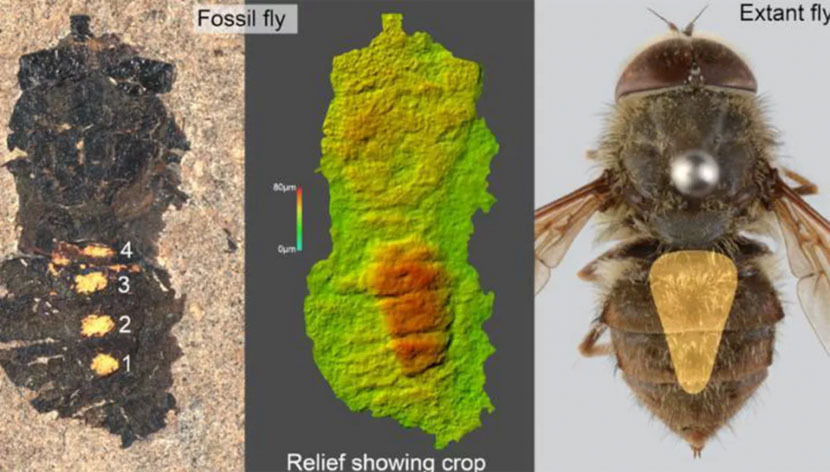 The team extracted and studied pollen particle fossils, and they traced them back to water willows and primitive Ivy plants. Images from electron microscopes help identify the origin of pollen. Plant types indicate that the flies forage in shallow waters.

Germany’s Messer Fossil Pit, which is listed as a UNESCO World Heritage Site, is considered “the world’s richest known place to live between 57 and 36 million years ago.” “The area was once home to an oil shale mine, but now it is the subject of many well-preserved fossils of mammals and other animals.

Flies may now be considered annoying insects, but the fossils and their huge appetite suggest that they could also be useful messengers of ancient times.