On April 10, 2019, the Vision Telescope (EHT) partnership released the first-ever image of a black hole. The target object, the M87 supermassive black hole 55 million light-years away, reveals a bright ring-shaped structure and its dark central region, the shadow of the black hole.

Now, EHT has opened up a new perspective on the M87 black hole: its images in polarization light.

This is the first time astronomers have measured polarization information that characterizes magnetic field characteristics so close to the edge of a black hole and is critical to explaining how the M87 galaxy transmits a huge amount of energy from its core.

After the first photos were released, the EHT group delved into data collected from the M87 black hole in 2017 and found that a significant portion of the light around it was polarization. 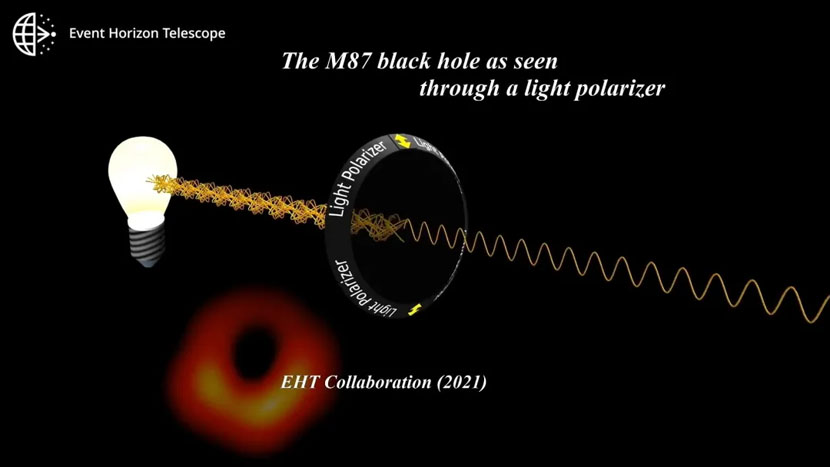 The bright jet of energy and matter ejected from the core of the M87 galaxy extends outwards by at least 5,000 light-years and is one of the most mysterious and spectacular features of the galaxy.

Most of the material near the edge of the black hole falls into it, but there are particles around it that escape in the moments before they are captured and spread outwards in the form of a jet stream.

The observations provide new information about the structure of the magnetic field at the outer edge of the black hole, and only theoretical models characterized by strongly magnetized gases can explain what is seen in the event horizon.

To observe the M87 black hole, the EHT group connected eight telescopes around the world to create a virtual Earth-sized telescope.

The study was published in a series of papers published in the astrophysical journal Express. In the video below, the team explains how to measure polarization light.